Extra teeth also known as supernumerary teeth occur in 0.2 – 0.8% of Caucasians in the primary dentition and 1.5 – 3% in the permanent teeth. The presence of supernumerary is twice more often in males than in females. Usually this condition is hereditary. If the parents have extra teeth there is a 30-50% chance for the child to have supernumerary as well.
In most of the cases the supernumerary tooth is located in the anterior maxilla, in the midline or adjacent to the midline. This condition is known as mesiodens. Basically the mesiodens is a supernumerary tooth but because of its specific location it has a different name. When such is found in the midline in the anterior mandibular section it is not called mesiodens. The mesiodens has a specific location and typical shape, often reduced and described as conical or tuberculate.
When the extra teeth are located in the posterior regions they are known as paramolars and distomolars. The paramolars are when then supernumerary is adjacent to the normal tooth in the dentition and the distomolars are the extra teeth that have a distal position compared to the normal sequence of the teeth.

What is the male:female ratio in supernumerary teeth and mesiodens?

They may be present symmetrically or bilaterally. One of the problems then can cause is the delayed eruption of the permanent tooth that are developing under it in the jaw. That condition is normally presented in the case of mesiodens.

Diseases in which mesiodens and supernumerary teeth occur.

Supernumerary teeth are presented in a number of syndromes and disorders – Cleidocranial dysplasia (Cleidocranial dysostosis), Oral-facial-digital syndrome Type 1 and Gardner syndrome.
The presence of malocclusion should be taken for consideration. The orthodontic problems can be a consequence of a supernumerary teeth that delay the eruption of the permanent teeth and cause tooth crowding. A single panoramic radiograph of the dentition gives us the information about the presence or sometimes the absence of teeth (hypodontia).
Before the treatment of supernumerary teeth there are some procedures that we have to remember. When we plan the orthodontic treatment we need a good quality study models, radiographs (a single panoramic radiograph is enough), and full face and profile photographs. The pictures are very important for the dentist because after the treatment the patient cannot remember his initial outlook. With the full face and profile photographs the dentist should make a before-after picture that objectively shows the change not only in the teeth but in the soft tissues profile and the lips morphology. 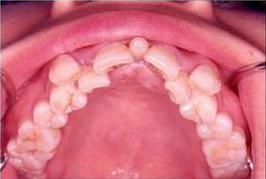