The increasing number of people looking for the dentist services has led to the development of dentist charts that are used in the numbering of human teeth. There are different systems that dentists use in numbering of the teeth with the supernumerary teeth numbering system being one of the most common ways that can be found in most dentist charts. 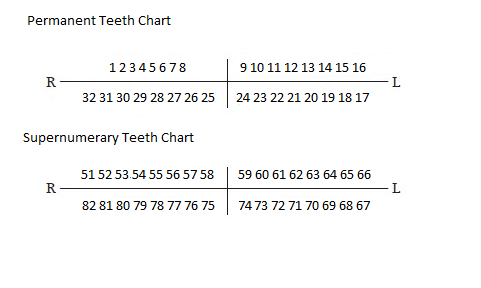 It would be important to point out that the supernumerary teeth numbering system varies from one country to another. The system that is used in the United States varies greatly with one used in some European countries like Germany. The United States system allows for the numbering of the teeth by adding up 50 to the number of the teeth where one starts from the extreme molar tooth that is in the upper right jaw with the last teeth given the value of 16 being the Molar tooth in the extreme part of the upper left jaw. When these teeth are numbered supernumerary the values become 51 for the first tooth on the upper right jaw and 66 for the last molar teeth in the upper left jaw. This totally different from the system of numbering in most European countries where most dentists prefer to use alphabetical order values in the numbering of teeth in their charts. The need to have a uniform system of numbering teeth in the world has led to the suggestion of adopting the US supernumerary system by some dentists. Whether these suggestions will be adopted by the dentists is something that we eagerly await upon, only time will tell.